Getting started with Fluidkeys in your team

Fluidkeys is a command line application that gives your team PGP encryption superpowers. It makes it simple to share and store sensitive data, safeguard your source code and use popular open source PGP tools.

Fluidkeys automates key rotation and exchange amongst a team. This guide will get you setup as a team and each member of the team setup with new PGP keys.

If you’re already using GnuPG with your team, and want to use these existing keys with Fluidkeys, check out How to import your existing keys GnuPG keys into Fluidkeys

Set up your team

The fk team create command gets you started in creating a team in Fluidkeys. The first thing you’ll be asked is what’s your team email address?

After providing your email address, Fluidkeys will present you with a strong six word password password. It’s save this in your system’s keyring so you don’t have to keep typing it and so that Fluidkeys can automate tasks like rotating your key each month.

It’s important to save a backup of this password. We recommend putting it into a password manager as a backup.

Behind the scenes, Fluidkeys will generate you a PGP key and store this in GnuPG. The email address you provide will be associated with this key, and the password Fluidkeys provides will be used to protect this key. You can see this key in GnuPG by running gpg --list-secret-keys

Next Fluidkeys will check you’ve stored your password by wiping the screen and prompting you to repeat back one of the words. You’ll then be prompted to verify your email address.

Fluidkeys will then complete a number of tasks to create your key, before asking you for your team name:

Fluidkeys will then create a roster for the team which is a list of all the people in it. At this point, this will just be you. You’ll get a chance to preview it, before being prompted to sign it and upload it to our team server.

Cryptographically signing the roster means your other team members can validate that you, and only you, have edited this file.

Everyone in the team has a copy of this roster and it is used to lookup which key to use for an email address and fetch the corresponding keys.

Invite people to join your team

Once signed and uploaded, you’ll then be given an invitation you can share with your team members to join you:

When each of your team members runs fk team apply ... they’ll be guided through a similar set-up you did when creating the team: they’ll be asked what email address they want to use, be given a strong password. Finally they’ll be given a message to relay back to you to authorise their request to join the team.

If you lose this invitation at a future date, you can always get the invitation code by running fk status

Once various members of your team have applied to join your team, you’ll need to authorize them. You can do this with the fk team authorize command.

It’s important to check that the key and email information you’re presented running this command for each request matches what your team member sent you: 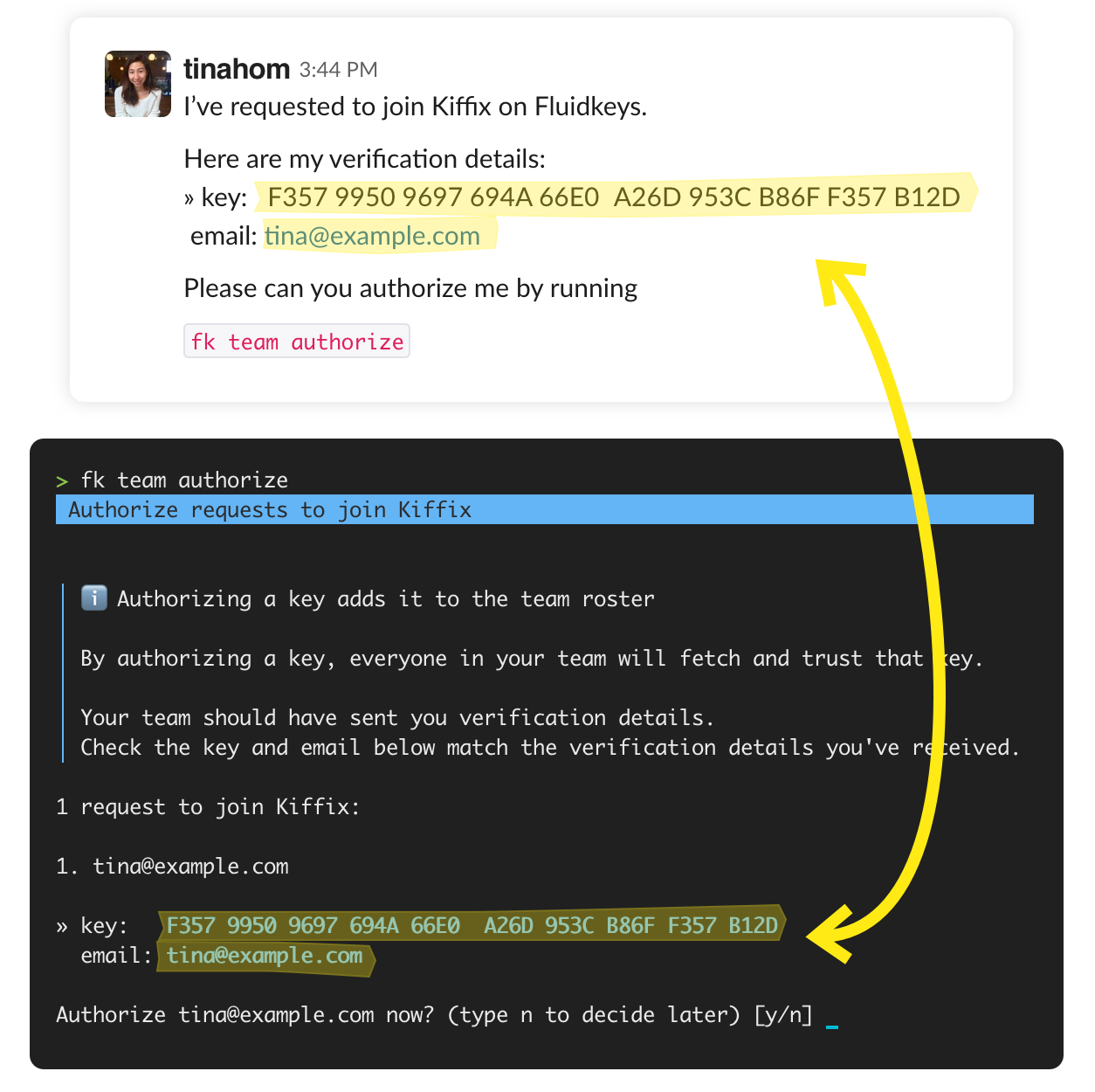 This is to ensure it really is them requesting to join the team, and not someone else trying to gain access!

You can always postpone making a decision on whether to authorize someone or not, by typing n. You can also reject requests, which means the team member would have to apply again to gain access.

Once you’ve finished authorising the requests, you’ll be prompted to sign and upload an updated roster.

Keep your keys in sync

Once this team roster is uploaded to Fluidkeys you and your team members can run fk team fetch to download one another’s keys and import them into GnuPG.

By default, Fluidkeys does this for you each day in the background. That way you’ll know you always have the latest key for each person and that they rotate each month.