Ian returned from his travels this week, fresh and enthusiastic! It’s been great getting stuck back in with renewed focus.

Mailvelope is a browser extension which adds PGP support to webmail like Gmail, Yahoo mail and others.

Until recently, Mailvelope did everything inside the browser, including storing your keys. That makes it difficult to integrate with Fluidkeys (which currently stores keys in GnuPG).

Mailvelope recently released a new version which uses native messaging to communicate out of the browser to GnuPG.

Since Fluidkeys pushes into GnuPG, in theory that change means that Mailvelope should now just work with Fluidkeys, which is pretty exciting. 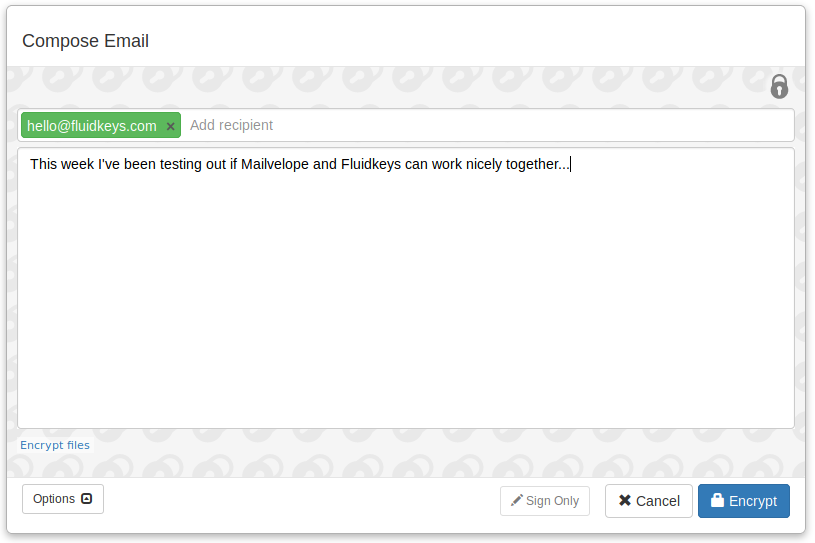 We spent some time this week compiling the latest GnuPG for Ubuntu 18.04 (unfortunately Ubuntu ships old versions of GnuPG) and seeing how it feels using Fluidkeys + Mailvelope as an email encryption solution.

It wasn’t seamless, but it was a good spike and I think there’s promise for this sort of integration. Fluidkeys could automate the installation and configuration of third-party apps like Mailvelope, leveraging the existing community of open source tools.

In the same spirit, we built a proof of concept to automatically configure git and Github for signing and verifying commits. There’s a few moving parts to get that “Verified” badge on Github and it seems Fluidkeys can turn this into a simple five minute task.

We started articulating what you actually get with Fluidkeys for Teams, how it looks and how it works.

Until now we’ve struggled to a think about the difference between Fluidkeys for Teams versus Fluidkeys for individuals — what should you be able to do with or without a team?

Ian had an insight that really none of Fluidkeys makes sense for individuals: there’s little point signing and verifying your own commits, or sending yourself secrets.

With that in mind, it’s hugely simplified how we think about Fluidkeys.

In the 1.0 release, Fluidkeys will be more akin to Slack than, say, Thunderbird. The core concept will be the team. In the same way as Slack, perhaps there’ll be a concept of a visitor or guest account that can interact with a team, but we think that’ll be the limit.

We’re working on some pages to illustrate Fluidkeys for Teams and in the next couple of weeks we’ll be getting out there testing whether it resonates with the teams we’re already talking to. Exciting!